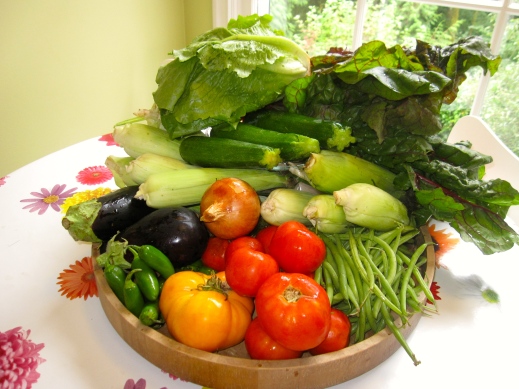 I think my veggie bag weighed more than last week, when it tipped the scale at nearly thirty pounds. Hard to believe, but true. I didn’t carry it upstairs to prove it, only because it was too heavy. I just kept thinking, “I was dying for corn…now I’ve got corn!” Ten ears, to be exact. With tomatoes, and jalapeños, and onions…yes, some Mexican, for sure. And chili (when the rain sets in), with CORNbread. Plus lots of other other late summer doozies. Enjoy!

Friday – bring out the TV trays!

Saturday – did someone say margaritas?

Thursday –  potpouri at its finest

Friday –  bring out the TV trays!

As amazing as the grilled pizza Fridays have been, I need to start practicing bringing the pizza back inside. The shift in weather always seems to happen in a rather shocking manner – I’m taking baby steps to get myself prepared. With the school year upon us, we really try to fit in a weekly Pizza Night. 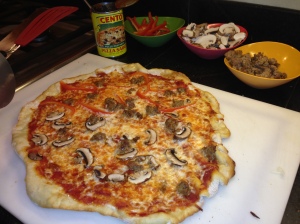 It’s super fun, interactive, and delicious way to use those farm-fresh veggies. Friday is the perfect night for this, not only as an end-of-the-week celebration, but because I can literally pick and choose the veggies off my table to top the pizzas. Truth be told, as much as I’d love every Friday to end with the family assembling pizzas in the kitchen together, followed by a TV tray dinner, watching a movie we unanimously selected without argument, it doesn’t always happen just that way. We love it, and we aim for it, but sometimes life gets in the way.  The great news is, with a little practice, homemade pizza night can really be an impromptu decision any night of the week. It becomes quite routine, and even with homemade dough, I consider it a quick week-night option (just allow for the hour of dough rising time.) Let this prior post be your inspiration and step-by-step instructional for pizza making! This week I can’t wait to repeat this no-sauce pizza featuring our farm-fresh chard. I’ll use my tried and true New Basics crust recipe (see Pizza Night link above), making one of the pizzas of the more “traditional” variety. The kids do the choosing on this – pepperoni & olive, canadian bacon & pineapple, sausage & mushroom, etc.  It’s funny, though, how often there’s leftover of that one, and not a sliver of the farm fresh “weird” one. Tonight’s looks not at all weird to me – chard, mozzarella, goat cheese, and a little bit of that seasoned olive oil brushed on the crust edges. YUM! Grab your dough from Hot Lips, New Seasons, or nearly any favorite pizza place if you’re pressed for time.

Saturday – did someone say margaritas?

With our precious northwest peach season coming soon to a close, I think it’s just the right time for Saturday night margaritas.  And given my abundance of jalapenos, I knew I’d have no problem creating Mexican night! Fish tacos just couldn’t be simpler, or healthier. With a good piece of white fish, some olive oil, garlic, and lime juice, you’re in business. I often make them with a cabbage slaw, but this week when I saw my ten ears of corn and pile of tomatoes, I was reminded of fresh summer relish I also like alongside tacos. Martha has a recipe attached, but I’m going to use this one from Emeril which kicks it up a notch. He calls for habanero peppers, but I’ll use a couple of my jalapenos. You can do raw corn salsa, or do as Emeril suggests and cook it just ever so briefly. The salsa is also delicious as a chip dipper, so you may consider doubling the recipe, just to have around. I’ll serve a side salad with this zesty lime dressing, some small garden tomatoes, and if I’m feeling fancy, a sprinkling of cotija cheese and roasted pumpkins seeds.

Sunday – chili, say it isn’t so

Yes, it was hard for me to write “chili”.  Seems so very fall, or winter, or something other than what we’ve been experiencing for months!  But I see the rain in our forecast, and nothing can brighten that outlook more than a fabulous pot of chili.  And it’s kind of a summery version, if there is such a thing. Martha’s recipe looks quite easy, and it will make great use of my onion and zucchini.  I’ll use lots of my fresh chopped tomatoes instead of canned, and a couple finely diced jalapeños in with the onions & garlic. Another great addition would be a couple ears’ worth of fresh corn – it would add beautiful flavor, texture, and color. I can’t think chili without thinking cornbread, so here we go with a jalapeño version. My tried-and-true jalapeño cornbread is from Ina Garten, but I thought I’d go out on a limb and try this one from Cooking Light, that is indeed lighter. Hard not to be, with Ina’s two sticks of butter and half a pound of cheese! No wonder it’s my tried-and-true! The real reason I strayed, however, is to try a recipe that called for fresh corn. I’ll replace the pickled jalapeños with my fresh, and hope for the best in terms of anything tasting as good as my guilty pleasure version.

Hard to believe so many people turn their noses at this most gorgeous of vegetables. Each week I’m surprised at the variety of eggplants I get – round, oblong, deep purple, blue-ish and white striped, and everything in between. It is a looker.  It’s taste and texture are unique, though. Eggplant parmesan is a dish that is cheesey, and saucey, and melty, and delicious. I shy away from it, mostly because of the mess and hassle factor. Most recipes have you first bread and fry the individual eggplant slices, which is a bit of an endeavor. This recipe from Whole Foods struck me as weeknight-easy (in addition to a bit heart-healthier!), as it eliminated the frying piece. Eggplant slices are pre-baked, then just layered amongst sauce and cheeses.  If you’re inclined to make your own sauce, there’s lots of easy versions out there; here’s one:  basic tomato sauce (Simply Recipes). A super simple side would be some sauteed fresh green beans. I’ll skip all the fancy additions (butter, salt & beans are the essentials!) in this. I just like the sauté technique for beans, as they get a nice spotty brown outside.

In good conscience, it’s hard for me to really call this dinner a “salad”. But it’s really fabulous!  Leave it to Cook’s Illustrated, even the 30-minute version, to make things look more complicated than they really are. The only real cooking part is the ground beef (or chicken, or turkey, or black bean…) mixture, to which I’ll add a jalapeño or two. The rest is chopping and shredding – my giant head of lettuce, tomatoes, corn-off-the-cob, grated cheese, avocado, olives, cilantro, tortilla chips…whatever you like!  Another one of our jalapeños will spice up the cilantro-lime dressing. Skip the entire fussy “final assembly” section.  Just throw the romaine and the beef mixture together in a large bowl, and let everyone make their own perfect, personalized taco salad at the toppings bar.  My son’s “taco salad” often amounts to a pile of chips, cheese, and olives.  And sometimes dressing.  And wait ’til you try corn on the cob with a flavored butter…this one with our fresh jalapeños and some garlic and lime.  So simple, yet so amazing!

Mmmmmm…this just looked so late-summery, and mouth-watering to me. Forget that it very well could be showering and in the downright cold 60’s. We’re still going to have a grilled eggplant & tomato sammie, darn it! Now that my tomatoes are just getting going, I try to find a place for them each night at the dinner table. It’s not difficult, especially since I’m inclined to simply slice several large tomatoes, put them on a platter with a sprinkling of EVOO, balsamic vinegar, salt & pepper, and call this a side dish. Heck, I’d call that a meal! Tomatoes in the sandwich, tomatoes on a platter, thank goodness for the extra large bag of pita chips, my kids will exclaim.

Thursday –  potpourri at its finest

I love it…swiss chard to start our week, and swiss chard to end it!  And this is no ordinary chard – brilliant red stalks, shining, bubbled, dark green leaves.  When I see veggies like this, I really want to “do justice” to them. And I think a no-frills, straightforward frittata accomplishes this.  I’ll use one of my onions, a whole bunch of chard, and then who knows? This is why it’s called potpourri night. What I’ve got left before my veggie week begins again, and what I think sounds good in what I’m making. Tonight…I might add some shredded zucchini when sauteeing the onion. And I might layer some sliced tomatoes on the top of the cooked frittata, sprinkling with a nice, flakey salt.  What I do know is that I’ll up the ante on the pan size, use eight or ten eggs instead of the called-for 6, all in an attempt to make room for all my additions! And I can’t let another week go by without making John Taboada’s (of Navarre) quintessential end-of-summer salad. So uncomplicated, it doesn’t need a recipe:  lots of heirloom tomatoes, about half as many peaches, a handful of fresh basil leaves, equal parts EVOO and balsamic vinegar, and sea salt to taste. Cut fruit into whatever bite-sized pieces you enjoy, sprinkle with roughly chopped basil, drizzle the dressing over, and stir. Enjoy. Enjoy some more, reflecting on our unbelievable northwest summer produce.

Don’t panic and get out the compost bin if all of the sudden you have a giant veggie delivery coming your way, and you still have a fridge full.  Here are a few suggestions for preserving the bounty!  (Soups and stews freeze wonderfully in those gallon zip lock freezer bags.)

Call it vegetable lust. I sit and stare at my table piled high with veggies from my CSA, tinkering and toying with the puzzle they present, until voila, out comes a meal plan for the week. Here I delight in sharing the resulting menus and ideas, where the fresh produce rules: in full flavor, in good conscience, and always in season.

the delicious pursuits of an ethical eater

Cook With What You Have

The latest news on WordPress.com and the WordPress community.