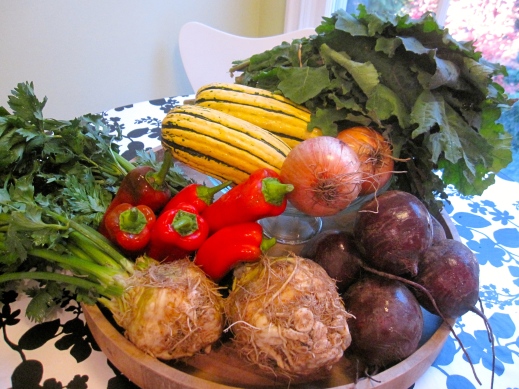 I can’t believe it. I missed National Kale Day! Apparently the first Wednesday of each October is dedicated to celebrating this dark, leafy green, superfood superstar. Talk about a nutritional powerhouse – loads of vitamin A, vitamin C, vitamin K, calcium, and a whole host of other good-for-body-and-soul stuff. And the great news is, just as we are lamenting the gradual disappearance of our beloved late summer veggies, kale is here to stay; it thrives in the cooler pacific northwest “dark months”. If you’re new to a CSA, be prepared. You’re bound to see kale, in one of its varieties, a lot. So stock up on those favorite go-to recipes – raw, cooked, smoothies, salads, chips…the possibilities are endless. I’ve marked my calendar for the next year’s National Kale Day, but in the meantime, I won’t miss a chance to honor the one just passed. My first fall delivery of winter squash (darling delicatas!), the end of a stellar sweet pepper season, and an ode to kale…all perfectly ripe reasons to celebrate! Enjoy this kale-a-day week!

Sunday  – fall at its finest

This week, to kick off our kale celebration, on the pizza it goes! Follow this previous Pizza Night post for a no-fail dough recipe I rely on each week. It makes

enough for two pizzas, even three if rolled out in the super thin, best-for-crispy-pizza style.  I’ll double the topping requirements here, and use some roasted sweet peppers instead of the sun dried tomatoes called for in the recipe. I’m going to roast and peel all of my sweet peppers right when I get them, to have them at the ready this week. This is a “no sauce” pizza; the garlic and red pepper infused oil (simple!) provides the base instead. I think it sounds amazing!  If you have kids (or adults) that just might not buy into the idea of kale on pizza, throw some pepperoni and olives on the toppings bar – see what happens. Just maybe they’ll find the pizza prettier with some green.

Kale and white beans are just a match made in heaven. Since it Saturday, I might even make time for the “quick soak” of the dried beans. Otherwise, canned white beans will work just fine. And it just doesn’t matter what type of kale you use…lacinato is what the recipe calls for, and is probably easiest to chop. But as long as you remove the thick stalks and chop away, any kale is super (and a superfood!). Using kielbasa (already cooked/smoked sausage) is a great time-saver, but you could saute up any sausage you love. Serve with a yummy cheesy bread (or just a good crusty loaf) and a simple green salad.

Sunday – fall at its finest

Apples (+kale!), winter squash, and maple-ey pork…fall is here! I’ll put it all together in a Sunday supper, that really is fairly effortless. I spotted this recipe for the apple kale slaw in the Oregonian this week – looks crunchy, fresh, and delicious. When I use kale in a salad (raw), I always chop it in super skinny ribbons. This trick, along with dressing the salad ahead of time, helps to make the chewy texture of the raw kale salad really wonderful, instead of a difficult-to-get-down deterrent. This is my favorite go-to recipe for delicata squash. I’ll cook it for less time, as a delicata is quicker to soften than an acorn (or any other winter squash). I keep it relatively healthy by cutting down on the butter, but still doing a bit of browning with some fresh sage (if you’ve got it). I’ll use the fresh sage on the pork too, cooking it all up in my trusty cast iron skillet.

Do not be afraid of the celeriac! It’s crazy-looking to say the least, but once you chop the tops off, and take the hairy, gnarly outside off the bulb, it’s a rather innocuous looking veggie. I just cut the top and bottom off the bulb, set it on a flat end on a cutting board, and with a small, sharp knife, peel in big strips from top to bottom. I usually end up jumping on it’s rich, elegant side, in creamy soups and gratins. This recipe from famed chef Yotam Ottolenghi uses celeriac, chopped in large pieces and just boiled briefly, in this mix of celery root and lentils (I’ll just use regular brown). For those of us still using the American-style of measuring:  I’ll use about 1/4 cup hazelnuts (just browning them briefly and removing them from one of the other pans I’ll use), one cup of lentils, and 3 cups of water. The warm lentils soak up the simple vinaigrette. I may have to skip the mint – think mine’s about done for. I’ll add some of my pre-roasted sweet peppers, along with the celeriac, in the final mixing of this hearty autumn main course. I’ll serve it alongside this zesty kale salad, replacing the mangos with a big, crunchy northwest apple.

Sometimes you just have to mix things up, and do breakfast for dinner. A frittata and hash hardly count – being quite hearty, savory dishes, they really can go either way. With the super powers of a kale smoothie, you could just as easily have your main course be pancakes or waffles (apple? pumpkin?), oatmeal, french toast, or a bowl of cereal. With some frozen blueberries (or any berries!) and kale leaves, you can whip up tasty smoothies in no time – adjust quantities for however many smoothie drinkers you have. I’ll skip the almond butter and wheat germ, keeping it simple. We’ll sip away at these while the hash is underway. I know I’ve got some serious beets to cook up, so I’m going to turn those into this hash & eggs breakfast-turned-dinner. Since I always (or at least always try to) pre-roast my beets at the beginning of my veggie week, I’ll have those peeled and ready to go, just leaving the potatoes to boil up. With my squeamish-with-runny-eggs family, I’ll be sure to put the lid on at the end, cooking those eggs just a bit more.

Now this is what I usually do with celeriac…cook it, purree it, cream it, make it rich, velvety, and seemingly decadent. But the richness comes from the root itself, along with a potato – just a small amount of butter and cream (I’ll use milk or half & half) are added. I’ll use my onion instead of a shallot. This bisque is weeknight friendly because all that’s to it is a couple minutes of chopping the very few ingredients, then inactive, covered cooking time to get it all softened. And this is where an immersion blender really is indispensable! No back and forth, pot to blender, etc. While the bisque is cooking, I’ll chop up the kale and whisk the super simple dressing. Add currants, raisins, or any dried fruit for a nice sweet contrast to the salty parmesan. Grab a baguette from your favorite bakery & you’re in business. I can’t imagine anyone could judge celeriac by its (not-so-fine) looks alone ever again.

I’ve gotten into kind of a weekly sammie night routine, and no one seems to be complaining! Modify fillings to your heart’s content; just know that beets and gorgonzola (or any type of blue cheese) is a match made in heaven. And it’s another simple night with my beets already roasted and peeled. Lots of bakeries will have a nice walnut bread – the sandwiches will resemble the beet, cheese, & walnut salads you pay big bucks for in a restaurant! But if walnut bread isn’t your thing (or your kids’!), pick whatever, but I do think a heartier, nuttier, whole wheatier bread would taste best in this combo. Forget the mayo, sprinkle with a little balsamic & evoo instead. I don’t have arugula, so I’ll sneak in just a smidgen of thinly ribboned kale. You could easily add some thinly sliced roasted chicken, and that would fit right in too. Plus kale chips – three ingredients, including salt & olive oil. Have you seen that there are gourmet kale chips selling out there for upwards of $8 or $9 a bag?!?  Whip up your own, save a bundle, and be amazed at the pleas for more. My hunch is there’ll be a bag of Kettle chips gracing the table too. It’s all about balance, right?

Don’t panic and get out the compost bin if all of the sudden you have a giant veggie delivery coming your way, and you still have a fridge full.  Here are a few suggestions for preserving the bounty!  (Soups and stews freeze wonderfully in those gallon zip lock freezer bags.)

Call it vegetable lust. I sit and stare at my table piled high with veggies from my CSA, tinkering and toying with the puzzle they present, until voila, out comes a meal plan for the week. Here I delight in sharing the resulting menus and ideas, where the fresh produce rules: in full flavor, in good conscience, and always in season.

the delicious pursuits of an ethical eater

Cook With What You Have

The latest news on WordPress.com and the WordPress community.